The Awards for Scientific Excellence are given to researchers working in the Autonomous Province of Vojvodina and the only criterion for being awarded is the number of citations. There are 22 defined fields and subfields of research and in each subfield, three awards are given.

It is exciting and important to note that we were the youngest reward recipients. Most awarded scientists are of the rank of full and associate professor. Of 52 awarded scientists, only six assistant professors were awarded. Also, it is interesting to consider the overall number of citations received for the year 2021, where we are the fourth and the fifth most cited researcher from Vojvodina, Republic of Serbia. The list goes as follows:

We are using this opportunity to congratulate all of the recipients of this prestigious reward, established last year, thanks to the initiative of several renowned scientists from the University of Novi Sad.

Head of the Provincial Secretariat for Higher Education, Scientific and Research Activity, Prof. Zoran Milošević gave an interesting speech emphasizing the importance of gender equality in science and the necessity of faculties to recognize their employees with the highest scientific contributions. Academician Prof. Dr. Teodor Atanacković was one of the reward’s initiators and gave a brief speech emphasizing the importance of recognizing the scientists with recognizable results. The most cited researcher from Vojvodina, Prof. Dr. Sergej Ostojić, also gave an interesting speech emphasizing the difference between quantitative and qualitative results. As Prof. Dr. Ostojić noted, “as the number of published papers increased, the quality of research seems to be decreased”.

Sanja’s certificate for the scientific excellence

Stevan’s certificate for the scientific excellence 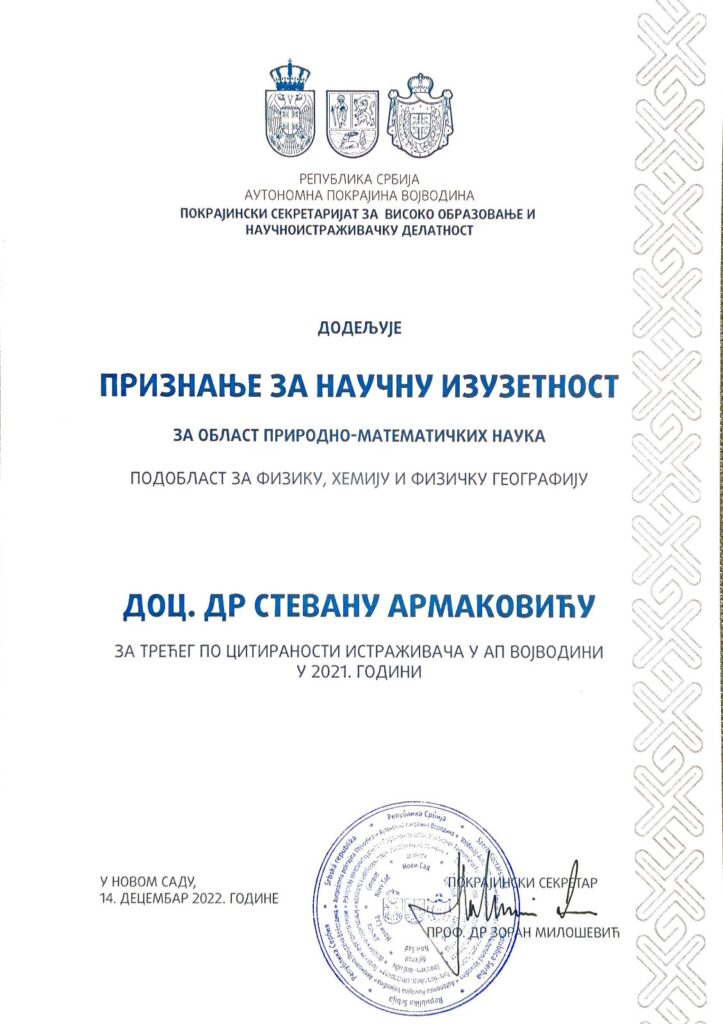